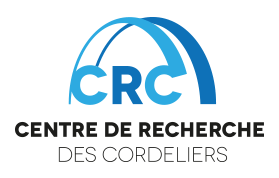 CRC is a research center of excellence located in the center of Paris. CRC develops fundamental, translational and clinical research in the field of biology and health. CRC's research projects are multidisciplinary, mainly in the fields of oncology, immunology, the study of metabolism and the major physiological functions of the body.
In January 2019, CRC has more than 500 people working in 17 teams in three departments with 3 ISO9001-certified technology platforms. CRC is headed by Professor Jessica Zucman-Rossi, a specialist in oncology and tumor genomics.
The Cordeliers Research Centre is administrated by Inserm, Sorbonne University, Paris Descartes and Paris Diderot Universities with the participation of the CNRS and the University Paris Nord.

The 2019-2023 projects
at the Cordeliers Research Center

CRC has 500 employees in 17 teams in three departments, "Physiology and Metabolism", "Immunology and Cancer" and "Genome and Cancer".
The projects are grouped around 4 major research axes:

The Cordeliers Research Center is located in the academic heart of Paris on a historical site. At the beginning of the 13th century, King Louis IX (Saint-Louis) offered fields of vines bordered by the enclosure of King Philippe Auguste to the brothers preachers of Saint-François: the Cordeliers, so named because of the rope that encircles their monastic dress. From the 13th to the 16th century, a convent was built with a church, two cloisters, gardens and a vast refectory, the only building that remains today. This community of Cordeliers will be a renowned educational centre in competition with the religious colleges located all around it, such as the Jacobins College or the Bernardins College. At the time of the French revolution in 1789, the Cordeliers convent was the meeting place of the "Club des Cordeliers, Société des amis des droits de l'homme et du citoyen" where Danton, Marat and Camille Desmoulins distinguished themselves.
In 1795, the new Medical School and its hospice were installed in the cloister. From 1872 onwards, the buildings were demolished to build the practical school of the Paris Faculty of Medicine. These premises, which belonged to the city of Paris since 1875, were transferred to the University in 1970. At present, medical education at the Pierre et Marie Curie and Paris Descartes Universities continues to be provided on the Cordeliers campus.