The Power of Ultrafast Lasers

Most of us are familiar with looking through a magnifying glass or down a microscope to get a better look at something small that intrigues us. But how do we see details on the tiniest things, like the microchips that live inside our smartphones and computers? This requires some extra power, so scientists use specialised techniques, like nanometre-scale imaging and ultrafast laser spectroscopy, to study the intricate patterns on microchips.

This precision imaging is at the heart of research being carried out by Sylvianne Roscam Abbing at the Advanced Research Center for Nanolithography (ARCNL) in Amsterdam. She’s in the third year of her PhD and is using ultrafast lasers to generate extreme ultraviolet light in a process called high-harmonic generation. In high-harmonic generation, an intense, ultrashort laser pulse is shot into gas suspended in a vacuum which generates a beam of extreme ultraviolet (EUV) light. This process makes it possible to image electronic motion on an incredibly small scale—one quintillionth of a second, in fact. “High-harmonics generation can be used to perform metrology, so to inspect semiconductor chips or other structures. It’s also possible to use EUV light to investigate things like electron dynamics,” Sylvianne explains.

From the very beginning of her PhD project, Sylvianne has been working in collaboration with colleagues at ASML, one of the world’s leading manufacturers of chip-making equipment (their systems were probably used to make the chip in the phone you’re reading this on). In fact, ARCNL is a public-private partnership between the University of Amsterdam, VU University Amsterdam, the Dutch Research Council (NWO), and ASML. It was these strong links with industry that attracted Sylvianne to join ARCNL, and the close contact with ASML has given her research a real boost. She says that in addition to regular meetings, one of her ASML colleagues carried out simulations for her research, and now they’re in talks about a new project they’ll work on together. Her group leader, Dr. Peter Kraus, is currently supervising the construction of a new powerful laser system to help ASML check the accuracy of superfine layers printed on microchips.

Sylvianne’s main project has focused on optimising high-harmonic generation. She’s looking to improve the brightness of the EUV beam generated in high-harmonic generation by increasing the efficiency of the process and improving the beam profile. She’s also exploring a new innovative technique involving generating high-harmonics from solid materials rather than gas so that that the generation surface can be structured. “My research has been more on the fundamental side trying to understand how things work and describing them with simulations and theory,” she says. “The next step will be to determine how you can use this in industry. One potential application would be to reconstruct the height of nanometer structures.”

The support staff at ARCNL have been invaluable to Sylvianne for their help with assembling the vacuum-based experimental setup, while the nearby Institute for Atomic and Molecular Physics (AMOLF) built the component vacuum chambers. She appreciates the supportive atmosphere among her fellow group members and says, “In general, we always work very close together, so it’s really teamwork. I’ve never felt like I’m doing stuff on my own – the whole group is always discussing what’s going on. That’s what I really like, because that’s also led, I think, to the fact that my research is productive.”

Having AMOLF close by has been a bonus as Sylvianne can avail of its facilities, like the cleanroom in the NanoLab and the workshop, for her PhD project. ARCNL and AMOLF’s location in the Amsterdam Science Park mean that they’re close to other research institutes that fall under the NWO umbrella too, in addition to a thriving network of startup businesses. The Park’s central location also ensures that it’s easily accessible by train and bike for visitors and employees.

Sylvianne has become involved in all aspects of life at ARCNL during her time there, including organising social activities and, during the pandemic, some online events. With only approximately 80 people working in the institute, she’s found it relatively easy to get to know and recognise people working there. Participating in works councils at both ARCNL and NWO has given Sylvianne the opportunity to understand the inner workings of both organisations, small and large, and learn about issues that affect employees. She says, “The nice thing about the institute is that management is very open to feedback or even criticism.” This sort of open communication creates a positive environment and makes ARCNL an excellent place to work. 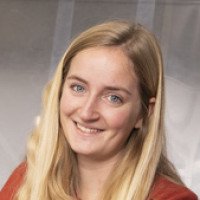 Sylvianne is a PhD student at the Advanced Research Center for Nanolithography (ARCNL) in Amsterdam. She's part of the High-Harmonic generation and EUV science group.

Going Nuclear to Save Time University of Jyväskylä 5 min read

The High-harmonic generation and EUV science group and EUV Generation...

This PhD project aims at understanding and controlling tin targets for l...

This two-year postdoc project is at the interface between science and ap...