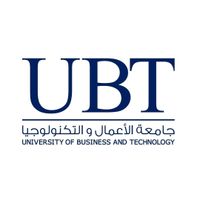 University of Business and Technology

The University of Business and Technology (UBT) is a young and pioneering private Higher Education provider established in Jeddah, Kingdom of Saudi Arabia offering, through its four colleges, a range of high quality, market responsive undergraduate and graduate programs. One of the distinctive value propositions of UBT is that it strives to prepare students with transferable skills required to excel as industry leaders and entrepreneurs.

UBT traces its origin to the Institute of Business Administration (IBA), established in the year 2000, offering primarily business diplomas for both male and female students. It then grew gradually and progressively to become in 2003 a full-fledged Four-Year College known as the College of Business Administration (CBA) offering six programs. During the following years, CBA has matured in a planned manner and achieved several milestones including: the introduction of several new programs among which was an MBA program in 2008, the growth in numbers of students, the expansion of its infrastructure and facilities, the establishment of a Continuing Education Center later re-branded to UBT Executive Education Center (EEC), and the setting up of the English Academy in 2010, among other initiatives.

To be a leading university nationally and recognized internationally in education and research for the advancement of society.

The mission of the University of Business and Technology is to contribute to society through the pursuit of high-Quality market-driven undergraduate and graduate programs and executive education that prepare competent professionals, future leaders and entrepreneurs, and applied research with tangible impact on the economy and community..