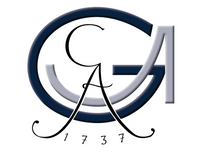 Founded in 1737, Georg-August-Universität Göttingen is a research university of international renown with strong focuses in research-led teaching. The University is distinguished by the rich diversity of its subject spectrum particularly in the humanities, its excellent facilities for the pursuit of scientific research, and the outstanding quality of the areas that define its profile. From 2007 to 2012 Georg-August-Universität Göttingen was rewarded funding from the Initiative of Excellence of the German Federal and State Governments with its institutional strategy for the future entitled “Göttingen.Tradition – Innovation – Autonomy”. The University was able to realise all measures of the concept. Now Göttingen University develops the successfully established measures further to continously advance the University’s positive developments in research and teaching.

A University with Tradition
The University bears the name of its founder Georg August, King George II of Great Britain, Elector and Duke of Brunswick-Lüneburg, (Hannover). In affinity with the spirit of the Enlightenment, Göttingen abandoned the supremacy of theology and set its faculties on an equal footing. As an academic location Göttingen was long regarded as the hub of the mathematical world – a position lost, however, in 1933 when under Nazi rule more than 50 professors and lecturers were forced to leave the University, among them several of around 45 Nobel laureates whose names are associated with the city. After the end of World War II, Göttingen University was the first in Germany to resume its teaching operations and it went on to become one the largest higher education institutions in the country.

University as a Foundation
Intensifying the process of internationalisation, promoting excellence in research and teaching, adopting Bachelor’s and Master’s degree structures, giving all levels of the University greater autonomy and self-responsibility, optimising resource allocation: These steps characterise the reforms recently undertaken at the University. At the beginning of 2003, the Georg-August-Universität became the first German university with a comprehensive range of disciplines to assume the legal status of a foundation under public law. The University has since then enhanced its research profile, created new research entities such as the Courant Research Centres and the Lichtenberg-Kolleg, intensified cooperation on the Göttingen Campus, attracted and retained outstanding academics and supported the recruitment of excellent students and young academics from abroad.